Located on Chicago’s North Side, Lincoln Square is often referred to as a small town found in the big city. The neighborhood is filled with a variety of charming restaurants and shops and offers the perfect mixture of traditional appeal with a modern twist. Today, we’ll dive into what Lincoln Square has to offer.

Lincoln Square is deeply rooted in its German history, thanks to settlers who discovered the area in the 1840s. Spurred by the invention of the electric streetcar and the opening of the elevated train line in the early 1900s, Lincoln Square’s population began to dramatically increase. Because of its growth in the 1920s, Chicago finally annexed the neighborhood. In 1925, The Chicago City Council named the community Lincoln Square in honor of the 16th President of the United States and Illinois resident Abraham Lincoln. The neighborhood’s notable statue of Lincoln was built later in 1956.

Today, the traditional German bars and restaurants that have been in the community for decades coexist with new, trendy cocktail bars and eateries. The neighborhood is a popular location for popular festivals and events that occur throughout the year, including Apple Fest and the Square Roots Festival.

Wintertime in Lincoln Square grants some of the best activities that can be found in the neighborhood. At the heart of the community, Lincoln Ave, which is home to a handful of beloved small businesses, including the famous Merz Apothecary, promises to have the perfect gift for anyone on your list. After you shop, stop at one of the many local cafés to relax with a delicious mug of warm hot chocolate. 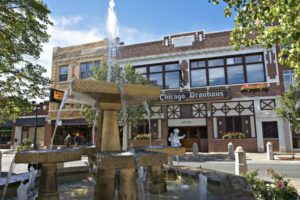 Since Lincoln Square is approximately seven miles away from downtown, it’s one of the more affordable neighborhoods to live in close to the city. While the neighborhood still has a traditional atmosphere, modern designs and new cultures have given it a breath of fresh air in recent decades. Lincoln Square is a popular choice for young families and professionals alike and is the perfect location for residents who want easy accessibility to the city with a small-town feel.

If you’re interested in searching for your own place in Lincoln Square, feel free to contact someone from our team. And stay tuned for more neighborhood spotlights on our blog!