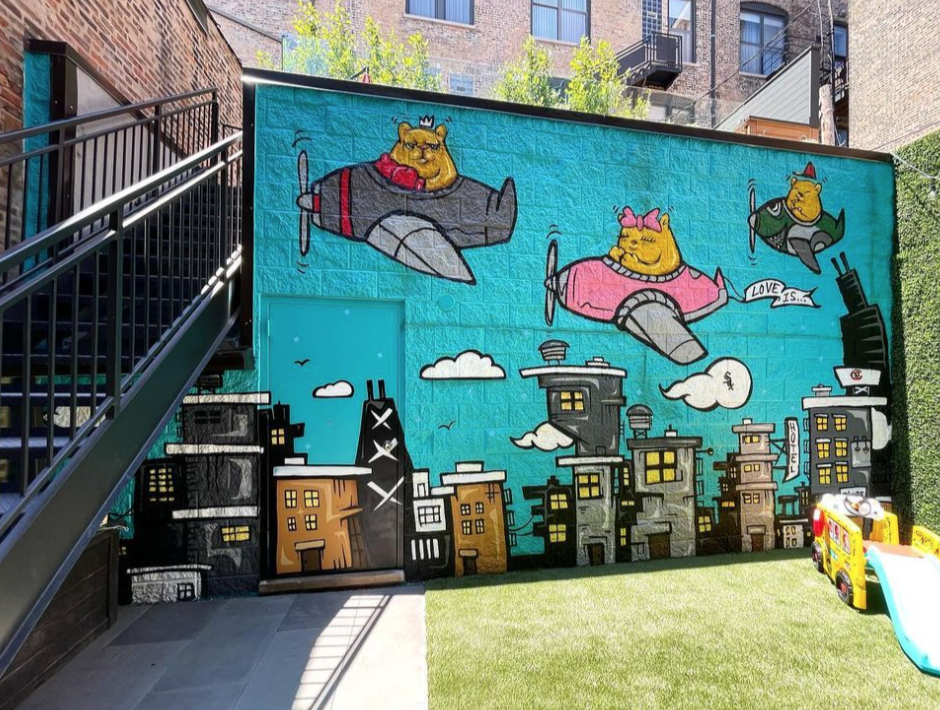 JC Rivera’s murals, specifically his “Bear Champ” character portraying a golden bear with red boxing gloves, have become an iconic part of the Chicago artistic landscape. Rivera’s murals exist on the interiors and exteriors of some famous Chicago institutions but can also be found in alleyways, under bridges, and along streets throughout the city.

Mario Greco, a Chicago resident and founder of leading residential real estate brokerage firm, MG Group, recently commissioned JC to paint a mural in his backyard after seeing JC’s work on a garage in his West Town neighborhood.

“We wanted to support local art, add color to the backyard, soften the tall, concrete walls, and make it whimsical,” Greco explained of the decision to commission a mural for his property. The mural takes up two walls of Greco’s backyard. One wall features three of JC’s “bear champ” characters flying in planes above the Chicago skyline (with the logo of his beloved White Sox in one of the clouds) while the other displays one reigning over billboards displaying the names of two of Chicago’s professional sports franchises. The murals reflect Greco’s passion for the city and its sports culture.

According to Greco, the inspiration for the murals comes from his and his family’s love for Chicago. “JC sent us a sketch, and we loved it right off the bat. We decided to add a few Chicago sports teams to the mural to connect it to the skyline he drew and to show my allegiance to all things Chicago — except the Cubs, of course.”